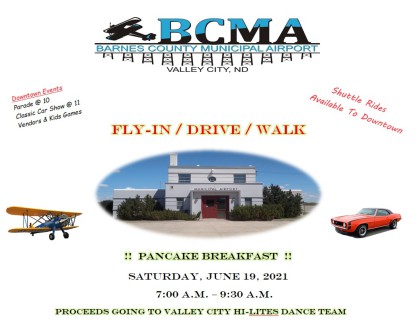 Please join us at the airport hangar #5 for a pancake breakfast to begin your day full of downtown events during Rally in the Valley! Everyone is welcome to attend and all proceeds will go the the Valley City Hi-Lites Dance Team. 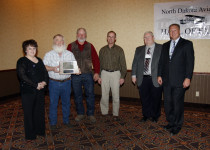 The Barnes County Municipal Airport has received the 2011 "General Aviation Airport of the Year" award. The award was presented March 6 at the Upper Midwest Aviation Symposium held in Bismarck. The award is sponsored by the North Dakota Aeronautics Commission in conjunction with the Airport Association of North Dakota. This award is for excellence in maintaining safety, project management and community awareness.

Presenting the award was Tim Thorsen, President of the Airport Association of ND and Larry Taborsky, Exceutive Director of North Dakota Aeronautics Commission. Present to accept the award were Dennis Helland, BC Airport Authority Chairman, and authority members Steve Nielson and Tim Logan along with Lori Jury, clerk. Others in attendance from Barnes County for the symposium were Shawn Anderson, Jamie, Terry and Nancy Bryn, Jon Kreilkamp, Diana Logan, Jon Jury and Kevin Helland. The airport's main project for the year was the concrete reconstruction of the 4200 foot primary runway. In addtion to the runway, a new runway lighting system was installed and many of teh airport signs were updated. Other recent improvements are wireless internet and digital television in the terminal lounge area. The Airport Authority took an active role this past year by providing fuel for events which provided free airplane rides for the community and awarded an aviation grant to the Valley City Flying Club to help continue flight instruction. The Authority also sponsored a noon luncheon and two Aviation Safety Seminars.

At the Safety Seminar held in November at Valley City Jay Flowers of the ND FAASTeam presented a Certificate of Appreciation to Jon Kreilkamp of Valley City and Bluffton, South Carolina in recognition of his efforts promoting aviation. Kreilkamp has been a flight instructor since 1985 teaching private, commercial, and instrument flying. He has his certification to teach flight instructors as well. Over the years, Jon has successfully taught close to 150 students who have gone on to receive their pilot license.

BC Airport Authority Chairman Dennis Helland of Kathryn visits with local aviation enthusiasts in attendance at the Safety Seminar including Gale Hansen, Steve Nielson and Keith Hovland, all of Valley City. The event was held at the Country Club with more than 50 pilots in attendance from several communities across eastern ND. 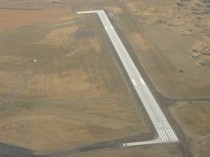 The $2.4 million dollar airport runway reconstruction project at the Barnes County Airport in Valley City is complete. The concrete runway, a first for Barnes County Municipal airport was opened on Saturday, October 29, 2011 with three generations of the Lindemann family to be the first to taxi their Vans RV 4 and Piper Super Cub aircraft onto the 4200' runway for takeoff.

Chairman of the Barnes County Airport Authority Dennis Helland says the contractor started the project in May 2011 and finished in late October. Helland, of Kathryn, ND who has served on the airport authority for more than 35 years says federal monies covered 95 percent of the project, with 2.5 percent from the state of ND and the remaining 2.5 percent or slightly more than $70,000 was covered using local tax monies on this project. Helland says the concrete runway should last for nearly 50 years compared to asphalt with a lifespan of 20 years. With good maintenance and upkeep efforts by the BC Airport Authority the previous asphalt runway outlasted its predicted lifespan by more than eight years.